“The only constant in life is change” – Heraclitus Earlier in the summer, Eric bumped the scar tissue on his ankle and it became a tiny hole. Over the past few months, that tiny hole has grown into two holes and is now one large hole. It’s boomerang shaped, about […]

It’s so hard to say goodbye

The day after getting set up, we attended a little orientation from the owner of what we could and couldn’t do and where things were around the property. We were told we can’t go on the resort really unless we were working, and if a guest of the cabins said […] 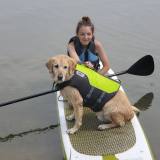 As we rounded out our trip from the Northwest expedition, we made met up with my Dad and step-mom at Alcova Reservoir in Wyoming. There were fires all over the Western side of the country and it was tough to breathe and see. Didn’t stop us from having a great […]

Eric here, humbly taking on the task of trying to write this part of the blog. I’ll do my best and please make fun of me if you need to! We decided to stay at the fairgrounds in Bonners Ferry, a little town very close to the border of Canada […] 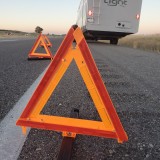 After Bonners Ferry, we were on a mission to make it South to meet Tiffany’s Dad and Chrisma at a lake and then to the Denver metro area for Tiffany to work and us to switch out summer stuff for winter stuff. Our first stop was another fairgrounds in a […]

Until we meet again 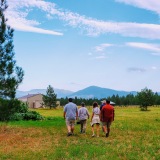 The bond we’ve created over these past couple of months with our children has been more momentous than I even hoped. The last day of our summer together, or as we’re calling it, Chapter 1, we sought out a nice little thrift store that had some of the most fun […]

We found a unicorn and Harry Potter at Coeur d’Lane

Ethan has been wanting to grow his hair out. He wants it so long that a braid will go down his back. Jillian is trying to convince him not to do it, but I think it’s his hair and he can do whatever he’d like, so, we’ll see. After he […]

The temperature outside, in the shade, was 105 degrees. We thought we were so clever coming up north during the middle of the summer, but with a heat wave like this one, there wasn’t much escape. We got set up on some BLM land for a couple nights, just between […]

There was a local beer I tried, called Moose Drool, that I believe is absolutely delicious. We found out their brewery, Big Sky Brewing Company, is a Harvest Host in Missoula, MT. Excitedly, we made arrangements to go and stay a night there. We needed to run some errands, and […]

Anaconda is the place where the largest free-standing brick building in the world, and is actually about 300’ higher than the Washington Monument. One of the people we ran across said it’s so big that the inside of the top of the tower is big enough for a truck to […]